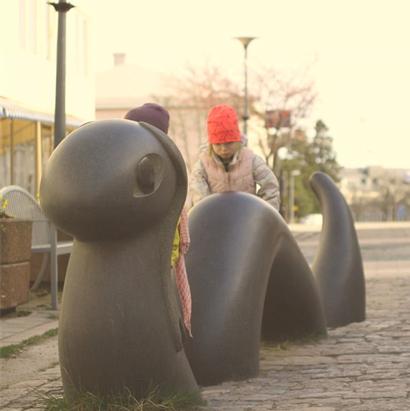 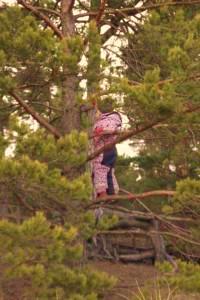 Spring, summer, fall and winter – there is always something to do in Hanko if you ask Anja. She has many favourites to share with someone who would rather be on the move than sitting still.

Climbing is high up on the list. When she visits the shopping street in the town center, she always climbs on the Snake, which isn’t technically a climbing frame, but rather a piece of art.

It’s not difficult to find a nice tree to climb on. The town is full of beautiful, crooked and strong pinetrees. The one in the picture Anja found at the Lappvik beach.

What other places should you visit when you’re in Hanko?

-Alan’s café and there you eat cinnamon rolls, says Anja.

The so called Lion´s park, beneath the church, is one of the most popular parks because it´s big and there is something for everyone. In the summer Anja eats quite a lot of ice cream as there is, fortunately, an ice cream shop right beside the park.

Anja thinks the water tower is an exciting place to go to. It’s open every day during the summer and Anja sees to it that she gets to go there as often as possible.

Tips for a rainy day

Her very first visit to a cinema was in Hanko: Kino Olympia. This is an authentic cinema with comfy seats and just the right amount of salt on the popcorn.

Other places Anja likes to visit in the city center is the library. It’s a pleasant spot to hang out in.

Anjas last, but maybe best tip, is to make a trip to one of Hanko´s beaches, to throw stones in the water, collect treasures and watch out for boats, ships and birds.

After these adventures you’re guaranteed a good nights sleep.